University of Botswana (UB) has always been opposition stronghold in Student politics, though Botswana Democratic Party (BDP) slightly dominated sometimes. This year however it looks like UB students were really disgusted by the ruling BDP.

For the first time in many years, the BDP Student wing, GS-26 has suffered a miserable loss, being voted by less than Five hundred (500) students in all the thirteen (13) portfolios. In their last whitewash in 2018/19 Student Representative Council (SRC) elections, though they lost, GS-26 was voted by more than One thousand people in all the portfolios.

In their 2021/22 SRC elections report, GS-26 has blamed their mother party for their misfortune. The young turks are saying they got punished for their mother party’s sins. According to the report, the students did not want to associate, let alone vote for GS-26 due of the wrongdoings of BDP at a national level.

As a matter of fact, the GS-26 says using the ‘CAVA the party’ mechandise during their campaign weighed them down as the students projected mother party’s sins on them. “Using CAVA merchandise derailed our campaign and made us a target and ultimately crucified for the doings of the mother party outside University corridors.” the report revealed.

To remedy the situation, the GS-26 suggested, “The reception of the GS-26 by the UB community heavily depends upon the doings of the mother party. Therefore it is advisable that the party periodically deploys party stalwarts and various structures to help the GS-26 defend itself and the mother party against attacks within the University. Additionally, the GS-26 to be granted a waiver regarding its members paying the required membership fee, so that it can recruit students for the party and no expense throughout the year. Furthermore, the Party President and members of the Central Committee to periodically hold and address public lectures relaying the teachings of the BDP within the lecture halls of UB.”

“BCP is committed to the UDC” – Keorapetse 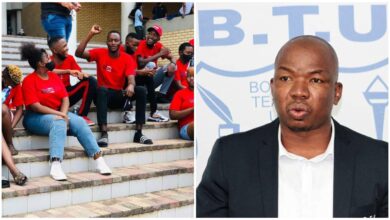 Where did the money come from?