The Police Acting Commissioner, Mr Phemelo Ramakorwane and his Zimbabwean counterpart Commissioner General Mr Tandabantu Matanga visited Special Support Group (SSG) camps along the Botswana/Zimbabwe borderline.
The purpose of the visit was to appreciate progress made on the implementation of police related assignments emanating from the agreements of the Bi-National Commission (BNC). The Commission was held in Victoria Falls, Zimbabwe this February.

Speaking at a brief meeting held at Maitengwe base camp on 21/06/22, Mr Ramakorwane said as Police Commissioners of Botswana/Zimbabwe they have a duty to ensure that the BNC resolutions’ are achieved.
He informed the meeting that Botswana is at an advanced stage of increasing base camps along the borderline. The Acting Commissioner said this move was meant to effectively manage cross border crime including stock rustling, which was noted as a major concern by BNC. He further noted that the strategy has already started bearing fruits, as there is a reduction in the recent stock theft cases recorded.

Mr Ramakorwane appreciated the collaboration that exists between the two Police Services, additionally, acknowledging borderline communities for their involvement in curbing transnational crime.
He however, highlighted lack of youth participation in areas of fighting crime and called for development of programmes that will infuse the youth in the structure of fighting crime as this can help reduce their involvement in crime.

For his part, the Commissioner General of Zimbabwe Republic Police (ZRP) Cde Tandabantu Matanga commended Botswana Police Service for its achievement of the set resolutions and promised that they will work tirelessly to ensure the same was achieved on the Zimbabwean side. 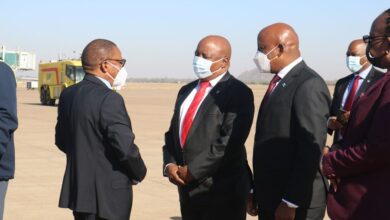