Money is a sticky dating subject, and one of the top reasons couples break up. While flashy shows of overspending may indicate someone who is foolish with his funds, a man who keeps his wallet on total lockdown is also flying financial red flags. How can you tell if your man is just watching his budget or is actually fiscally frigid? Look for these 10 telltale signs. 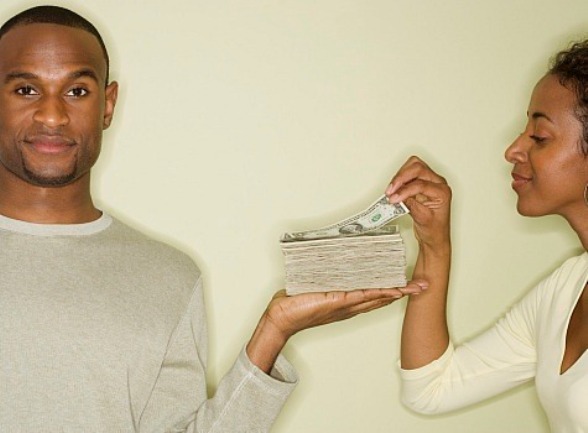 Some guys are so stingy that even if they travel from Gaborone to Maun to visit their girlfriends, they will be empty-handed. Presents are not about the material value, of course. However you should expect something that says, I take you seriously, I want to impress you, and I want to make you happy. If he never buys a gift nor takes you out,he is stingy

2. He’s Happy She Will Never Ask Him For Anything.

Virtually every guy wants a lady that will help economize his expenses and won’t mount financial pressure on him; but some are happier that their girlfriends have never asked them for recharge card or other perishable parameters no matter how she needs it.

3. He Always Complains About Money.

He blames the economy for his low financial power. He will keep drumming it to your hearing that things are so hard for him when in fact, they are not. This is to send signal to you as his lady that you can’t get a penny from him.

4. Dinner Is Always On You.

He lets you pay for dinner, wants to go Dutch, or simply hesitates when the waiter hands him the bill before he reaches out for his wallet. Well, this one is no rocket science. Paying for dinner, drinks, or whatever you are having on an official date is a man’s thing and will remain to be.

5. His Wardrobe Is Not Impressive.

He has been wearing the same shirt over and over again, and his socks look like they have been chewed on? It is one thing to be dating a man who can’t afford to buy designer clothes, but skimping on decent clothing and going out in rags is a whole different thing. If he has a well paid job and has no financial problems, he’s got no excuse to be dressed like a homeless person.

6. He Has The ATM Syndrome.

He’s borrowing money every other time you’re out, and he leaves you wondering why he had left the house with only 50 bucks in his pockets. When you start counting the number of times he says “oh I’m going to need to stop at an ATM before we go” hoping that you would say “oh, don’t worry about it, I got it this time” or “we’re already late, let me get this one and you can get the drinks later” then you know what it means.

Birthdays, Valentine’s Day, Anniversaries, Christmas and other occasions are great opportunities to express love, care, attraction or whatever you have got going on. For your birthday, your man should jump at the chance to let you know how special you are by going out of his way to do something wonderful for you.

8. He Calculates His Every Thebe.

Saving for a rainy day is great, being stingy about Grand Palm is ridiculous. If it feels like it hurts him to let go of every cents, and that his whole world evolves around gathering money, then he is the stingy type. And being aggravated to death about every small purchase certainly does not make anyone cared for.

9. He Drops You Signs That You Shouldn’t Expect More.

He prepares you for the big one by bringing up the money topic. How? He will find a way to comment on how certain things are too expensive. “That restaurant? it’s way overpriced. I would never go there in a million years!”.We all have our financial ups and downs, so if he’s having a bit of a dry spell you should definitely show some support instead of complaining that he hasn’t taken you out for two weeks.

Forgetting your wallet once is forgivable,and any guy worth his salt would be mortified. Forgetting his wallet again means he’s in dire need of caretaking, cheap, careless or some combination of all three. If your date can’t seem to remember to show up with his money, he might not be able to show up for you either. A truly interested guy will put his money where his date is