She grabbed the public’s attention when she was a contestant in the talent search show My Star. She never made it to the finals though but today Amantle  Brown is one of the most inspirational artistes ever.

A few years after My Star, she released a hit song Moratiwa and she regained her popularity. She went on to release Black ba mpatile and officially became a household name. She has since perfomed at some of the biggest shows in the country.

This month, August 26 at Stanbic Pazza Amantle will have the privilege to perform alongside South African singer and songwriter Jonathan Butler at the GIMC Jazz Festival.

Performing at the event also will be internationally based jazz artists Loraine Lionheart and Trinity Mpho among others. 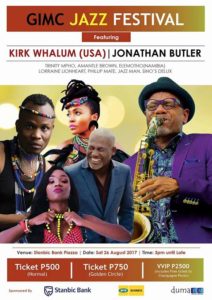