Musician and rapper Ozi F Teddy is in the headlines again but this time around he is not on the news for music greatness but for abuse allegations he made against his girlfriend. The rapper has broken the stereotype by being the first male musician to open up about abuse. He is alleging that he has been hoping that the situation with his current lover will change but nothing best came out but just the fights.

Below is a picture he used as his abuse evidence; 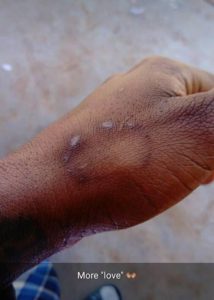