University of Botswana students today held a memorial service for one of their own Nametso Bogopa who was allegedly killed in a stampede at the GIMC music festival over the weekend.

The 20 year old student was found lying helplessly outside the stadium early Sunday morning and she was certified dead upon arrival at the hospital. A lot of attendees have been complaining that the festival was infested by petty criminals who abused everyone they. A good number of people left the stadium wounded and with injuries.

There was apparently not enough security at the event and a huge number of people turned up resulting in a stampede that eventually claimed the life of Ratholo born Bogopa. May her soul rest in peace.

Organiser of the event Fish Pabalinga has come out to apologize for all the unfortunate events that occured during the weekend and promised they doing everything in their power to help the police with investigations. 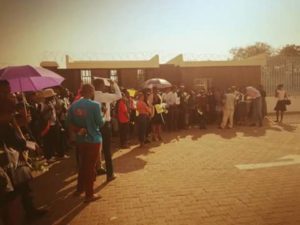